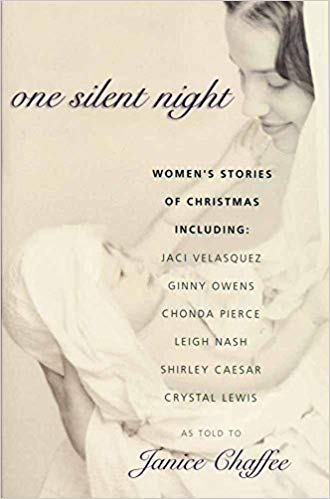 The whole of Christ’s story, the crucifixion and the resurrection, began with the power of the incarnation.

So let the ages wonder,
That the angel bore the seed
That the virgin received through her ear
And believing in her heart, bore fruit
Venatius Fortunatus, Latin Poet .

How does this miraculous entry into humanity affect the stories of our lives — our past, our present, and our future? The Christ Child in the setting of the nativity embodied a prophesy fulfilled, a present hope, and a promise for the future.

This book is a collection of true stories of Christmas. It records the voices of women who, in various stages of life, grasped the eternal, knelt in adoration, and experienced the meaning of the incarnation. These women began their spiritual journeys to the resurrected Christ with a step towards the infant in the manger. They found hope in the pain of despair and contentment in the realities of life. They found constancy in the unexpected because of their faith in a baby in a manger. Like many, they heard the voice of God one silent night.

This is what Jaci Velasquez, a Christian musician who won several Dove awards and had her first Spanish album nominated for the Best Latin Pop Performance Grammy Award, wrote in her Christmas story:

“Even though I’ve heard the original Christmas story so many times, it’s still wonderful to hear it again – the angels, the shepherds, the wise men bringing gifts to the baby in the manger. There’s such comfort in knowing the story will be told again and again and that it will never change.

God promised to be faithful to all generations and He is. It’s up to us to pass on the story of Christmas, just the way my family passes on the tradition of red chilli on mashed potatoes. It’s one thing to pass on tradition of food, but it’s more important to pass on a tradition of truth that affects eternity.”

This book offers many more inspiring true stories of Christmas shared by various women to the author, Janice Chaffee. It is worth your reading.